The Alex comic strip - direct to your phone in glorious colour and for free. Free..? Alex would never approve.

This is the best way to enjoy Alex on the go. New features will be released shortly.

A promo for Alex The Stage Play, written by Charles, based on the stories and jokes from Russell’s and his 20 years’ of comic strip output, which starred Robert Bathurst, was directed by Phelim McDermott, had projection design by 59 Productions and animations by Charles.


Another promo for the play, with Robert Bathurst talking about his role and the collaboration.

Like all bankers, Alex realises that making money isn’t everything. It’s what one does with it that is important. Such as using it to hopefully get oneself a knighthood one day. Here are some of the charitable causes that he supports. 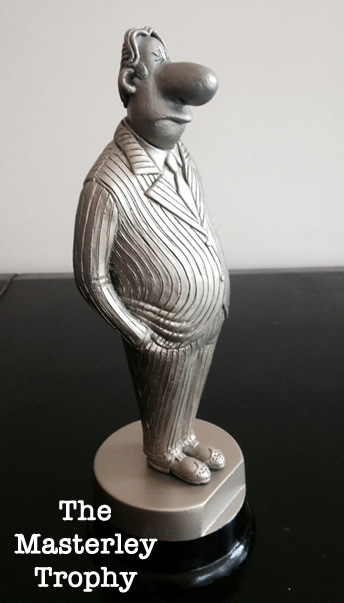 The Alex City Quiz is an annual charity event which was first held in 2007. Russell is a keen quizzer who occasionally sets the questions at the Prince of Wales in Highgate (supposedly London’s hardest pub quiz). He launched the Alex City Quiz in 2007, just as the financial crisis was kicking off to cheer City folk up until the global economy recovered. Needless to say, the quiz is still going. Its title is a multiple misnomer as it is neither about Alex nor the City. Instead it allowed bankers, who had already proved to the nation that they knew nothing about finance, to instead test their mettle on the slightly easier subject matter of pop music, TV, cinema, science, current affairs etc. It now attracts a regular guest list of bankers, brokers, lawyers, accountants, financial journalists and PR people. Writer, journalist and Round Britain Quiz panelist Marcus Berkmann co-hosts the evening with Russell and the prodigiously talented Harry the Piano performs the now legendary music round. Over the years the event has raised money for various charities including the Lymphoma Association, Treloars School, the Aletheia Foundation and the Good Grief Project.

An annual fund raising dinner held at the Savoy each October (natch) which attracts the great and the good of the City and raises generous sums of money (in the region of £500,000) for its chosen charity. Alex has been attending it annually since 1999, usually expressing some cynical observation about all the ostentatiousness on display. Again the original artwork is auctioned for the charity by auctioneer Martin Pope. The record price fetched is £14,000 (when two hedge fund managers locked horns in internecine combat in their desperation to acquire it).

An annual charity cricket match hosted by Sir Victor and Lady Blank in the back garden of their seventeenth century house in Oxfordshire (yes, their back garden is large enough to accommodate a full sized cricket pitch). Alex attends every year in a fictional capacity, normally more concerned with networking with the senior business figures there than actually playing or watching the cricket. The original artwork is auctioned each year to raise money for Wellbeing of Women.

In 2015 Alex was invited to present one of the prestigious Extel financial awards via video link. The event in Guildhall was hosted by Emily Maitlis. It also coincided with Royal Ascot. The actual winner of the award seemed bemused (and possibly mildly insulted) to have been presented with this hard-won token of his industry’s esteem by a cartoon character.

This is a live composited video clip, which was made to promote the infamous Alex Radio programme, written by Charles and Russell, wherein Robert Bathurst, reprising the role of Alex, played DJ to classical music tracks on Sundays for twelve weeks on Classic fm in 2010. It was controversial because some listeners believed they were listening to a genuine, obnoxious, outrageously insensitive banker, rather than by a spoof one. The promo helped win Charles and Russell (and Nick Russell of Global Radio who conceived the idea of the show) a Sony Gold award and a Media Week award in 2011. Special thanks to Towry financial management, who sponsored the show and to Mark Warren (Charles’ ‘Celeb’ collaborator in Private Eye) who helped out with the writing as deadlines loomed each week. Compositing here was by Tom Baker.


Look at the stars

This is the first ever example of an animated Alex made in 2001 by Charles Peattie and Ali Hobbs, based on one a very early strip from 1987. Alex is voiced in this clip by Charles.

In 2009 Charles created a series of experimental moving comic strips for mobile telephones to commemorate the first anniversary of the start of the financial crisis, in collaboration with Breakthru Films. The transitions were activated by the reader, but the clips are edited together here. One of the sequences was based on a series of strips from Christmas 2008 in which Alex and Clive were transported back to the Dark Ages to be punished for the collapse of the financial system.