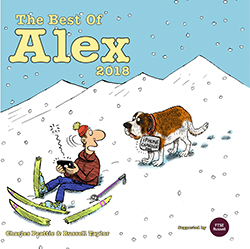 NOW IN HARDBACK AND FULL COLOUR THROUGHOUT

It’s the tenth anniversary of the Global Financial Crisis and the naughty bankers like Alex who are shouldering the blame for causing it are finding themselves punished with a stern new regulatory regime.

Alex has to face up to MiFID II and GDPR; not to mention the requirement for companies to announce their gender pay gap, which leaves his employer Megabank found sorely wanting.

He pulls in some fees from working on the flotation of the Soho House club and on a sandwich shop franchise run by an ex-graduate trainee; while his colleague Clive’s finances look increasingly precarious as his divorce from Bridget continues.

The UK seems to be heading towards a no-deal Brexit and banks are forced to contemplate the grim reality of relocating to Frankfurt, with Alex and Clive sent on a fact-finding trip there. That dirty stop-out, English football, once more fails to “come home” in the World Cup and Alex has a nightmare about working in a dystopian future corporate world run by robots.