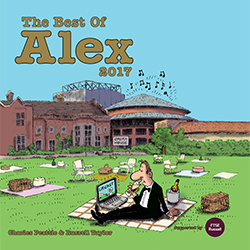 NOW IN HARDBACK AND FULL COLOUR THROUGHOUT

It's 30 years since Alex began his career in the City of London.

Today's post financial crisis reality comes as a grim contrast to those far-off, heady, carefree days of the 1980s, with all the additional uncertainties of Brexit, Trump and a General Election.

The star of the Daily Telegraph’s business pages divides his time between worrying about his job being relocated to Frankfurt post-Brexit, fretting over the arrival of the draconian new compliance regime Mifid II which will make half the City redundant and remaining blissfuly ignorant about BlockChain which will do the same for anyone who’s left.