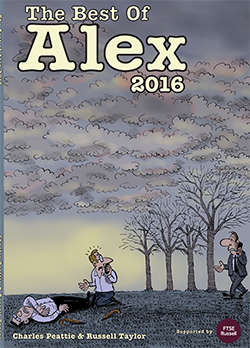 Britain's favourite banker is back, battling Brexit, Bitcoin and beards..

It's 30 years since Big Bang and the City is swamped with alien concepts like P2P lending, Blockchain, Mifid ii and brown shoes...

Alex contemplates alternative careers; his old boss Rupert is kicked upstairs to become chairman of the bank's art committee; and colleague Clive comes home early from work one afternoon to discover his wife, Bridget, in bed with his boss, Cyrus. He is forced to ponder the implications for his marriage, his children and, most importantly, his bonus.

The bizarre topsy-turvy reality of the New Normal spreads to the world of politics as Jeremy Corbyn and Donald Trump move from the political fringe to the main stage and Britain votes to dump the European Union in the Brexit referendum.