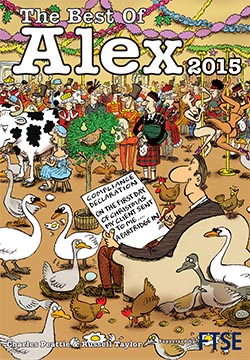 Alex is beginning to think that the financial crisis wasn't that bad in comparison to the vindictive compliance regime that's been brought in to prevent it from ever happening again (in theory at least) and which seems bent on destroying his ability to do business - or at any rate to do it over a pleasant lunch or a day's grouse shooting.

The global economy remains in the grip of the topsy turvy New Normal, where most of the laws of economics seem to work backwards, with major wobbles in Russia and China, and Greece teetering permanently on the brink.

The UK goes to the polls in a General Election, Alex floats a lapdancing bar chain for a Russian oligarch, his bank gets a new CEO and England's sporting teams go through the full rollercoaster of attainment: from victory in the Ashes to humiliation in the Rugby World Cup.