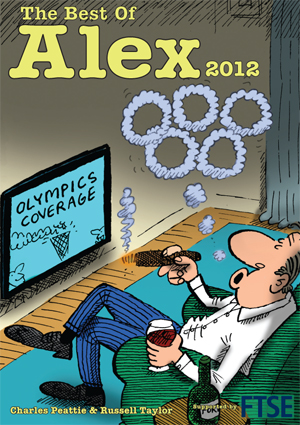 The country is swamped with patriotic fervour as the Olympics come to London. Alex is at a loss to understand why he wasn’t chosen to participate in the opening ceremony to reflect the vital contribution the financial community has made to the capital.

In this latest collection of cartoons from the business pages of The Daily Telegraph Alex becomes increasingly aware of mortality as he attends a memorial service for a client, celebrates his fiftieth birthday and has a heart attack (inconveniently during Cheltenham week). In the meantime his colleague Clive attempts to grow a moustache for charity and sees his long-awaited novel finally published. 2012 marks the 25th anniversary of the Alex cartoon strip, which began mocking the financial world back in the 1980s, when yuppie bankers were held in public contempt for being greedy, arrogant and immoral. Plus ça change...