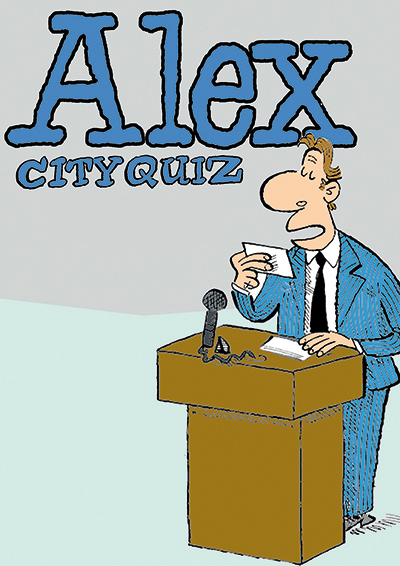 On May 22nd 2019 the usual contingent of bankers, brokers, lawyers and financial PR people descended on Conway Hall in London’s elegant Bloomsbury district to take part in the tenth annual Alex City Quiz. It turned out that the Communist Party of Great Britain was holding its annual general meeting at the same venue that evening. As the Sparts, Trots and Corbynistas plotted the overthrow of the capitalist system, they were probably unaware that it was in full flow in the adjoining hall.

The balmy Spring evening was perfect weather for quizzing, though a few contestants had inexplicably elected to go and drink beer in riverside pubs instead. There were also few no-shows on account of the availability of cut-price pre-bank-holiday-weekend flights to Spain. Anyone who had taken advantage of this cheapskate option was swiftly added to Alex’s embargoed list for next year’s quiz.

The eleven teams of six players each who turned out were mainly seasoned and battle-scarred regulars. But there were two teams of newbies, blinking anxiously in the light of England’s oldest ethical society and wondering what they had let themselves in for.

The quiz was hosted as ever by Alex co-creator Russell Taylor and Marcus Berkmann, writer, journalist and Round Britain quizzer (the John Julius Norwich de nos jours), ably assisted by Suzette Field, Tara Spring and Russell’s six-year-old daughter Una. The charitable cause was St Christopher’s Hospice.

The evening’s glittering prize - the Masterley Trophy, a gilded statuette of Alex reminiscent of an Oscar and freshly minted for the occasion by model-maker Eleanor Tomkins, was on proud display. Among the teams were four former winners of this prestigious trophy, which boded well, in that there was bound to be plenty of disappointment, rancour and recriminations by the end of the evening.

Unusually for a quiz night there was a good representation of women and Millennials on the teams. Millennials of course are well known for knowing nothing about anything other than themselves. This evening was the opportunity to right this cruel misconception (much perpetuated in the Alex cartoon). Most of the other competitors were the standard grizzled men in their 50s. As Russell reminded them in his opening remarks: you may not be wanted in investment banks any more, but a quiz night is where you come into your own.

The rules were briefly explained: there would be six rounds of ten questions, including a picture round and a music round. Each team also had a joker which could be played in advance of any round and would double the team’s points tally for that round. Russell advised them to play it on the first round in that (a) it’s usually quite easy and (b) you then don’t spend the rest of the quiz debating which round to play your joker on. In any case Sod’s Law dictates that whatever round you play it on will inevitably prove to be your lowest scoring round of the evening.

Next came the ritual switching off of mobile phones, something that the Millennials found particularly traumatic. But they all had to go off - especially those cheap Huawei ones - as we didn’t want the quiz being relayed live to Beijing. But come to think of it, that still happens even when they are switched off

Round One was general knowledge and included a question in honour of the fact that it was Morrissey’s 60th birthday (“Which well-known radio broadcaster inspired the refrain ‘Hang the DJ’ in the Smiths song ‘Panic’”?)

Round Two was a connections round called “The Seasons” in which all the answers were the names of herbs or spices. This gave Russell the chance to recycle a question he had heard twenty years ago in the Tuesday night quiz in the Price of Wales in Highgate: “Who said ‘I did everything that Fred did, only backwards and in high heels’?” One wag had shouted out back then “Rosemary West” (not the correct answer, although her name would also have fitted the theme).

Round Three was a film round. One team failed to get “The Magnificent Seven” - which is odd as it is possibly the most asked-about film in quizzing history.

At eight c’clock there was a break for refreshments and networking. As the quizzers tucked into their sandwiches they had to identify 20 inebriated celebrities in the picture round (entitled “Whose Round Is It Anyway?”). Iconic drunks was a subject that they clearly excelled at and over half the teams scored full marks on the round.

Regular participants had been wondering about the absence of a piano on the stage. Did this mean that Harry the Piano would not be taking to the keys to perform one of his legendary improvisations in the Music Round? Indeed Harry had double-booked himself to play at the Newbury Jazz Festival, but appeared on the big screen performing a medley of songs on the theme of transport. You can hear it here.

Going into the final general knowledge round it was neck and neck between the ponderously-named, four-times former champions I’m Not the Quizmaster I’m a Very Naughty Boy and The Bond Street Quizzical Society. Question One in the round was about the recently concluded Premier League (“Manchester City and Liverpool have anthems - ‘Blue Moon’ and ‘You’ll Never Walk Alone’ - that were written by the same Broadway composer. Who?”). There had been only one point in it in the football and so it transpired in the quiz. But would be the Man City and who the Liverpool? In the end it panned out the same as the football: the team that had never won it before - Bond Street - fell agonisingly short; and the past champions - I’m Not the Quizmaster - retained the single point advantage that allowed them to lift the Masterley trophy again. Bond Street had to content themselves with a replica trophy they had brought along. The team member who had written down “Edward VI” instead of "Henry VI” for question seven would have to buy all the drinks in the Old Red Lion afterwards.

It only remained to hold the traditional Snowball Round. Over the course of the evening the quizzers were invited to put their business cards (attached to a £20 note) into a hat. At the end of proceedings the idea was that Russell would pull out a card at random, dial the mobile number on it and ask the person who answered a simple question about Alex, which if they answered correctly would win them a signed, framed Alex original cartoon. Normally this goes without a hitch. This evening it proved more problematical. Firstly it seems that in the age of LinkedIn fewer people bother to carry business cards. Or maybe it’s just cost-cutting by banks. Secondly, the card that was pulled out of the hat proved not to have a mobile number on it. So Russell dispensed with the formality and simply invited the person (a dentist named Daniel) to approach the stage. The question was simple enough for anyone with a passing knowledge of Alex (or indeed the City): “Which city does Alex constantly worry about being sent to work in post-Brexit?”. Daniel struggled with it and was clearly bothered by something more than his ignorance of Alex’s phobias. There was a commotion at the back of the room. It turned out that the person standing out front was an imposter and, though he was indeed called Daniel, he was not a dentist. The person who replaced him and who had put the card in the hat was actually a dentist, but not one called Daniel (it turned out he had put a colleague’s card into the hat). This was beginning to resemble the Monty Python “bogus psychiatrist” sketch (Millennials, look it up on Youtube). In the ensuing kerfuffle it was not clear who left bearing the cartoon original.

On leaving the event there is a tradition that one of the well-refreshed quizzers steals the cardboard cutout of Alex, which is found the next morning seated at the boss’s desk in some investment bank (and often doing a better job of running the department). Touchingly this year the light-fingered participant actually offered to pay £40 to the charity for the right to purloin Alex.

The Pollikett Spread (named after Russell and Marcus’s late friend Chris Pollikett) determines that the optimum span of scores between last- and first-placed teams in a quiz should be approximately 55% - 85%. The range of scores this evening was 60% - 92% suggesting that the quiz was slightly too easy. But of course there is no such thing as a quiz that is too easy. There are hard quizzes of course - after which the competitors round on the quizmaster to complain that the questions were too difficult. But if the questions are too easy the participants merely congratulate themselves on how clever they are.

Just in case you were wondering, those answers were:

See you next year.