Alex goes to the polls

The Alex cartoon strip had been running for less than four months, in the now defunct London Daily News, when we had to cover our first general election. Alex was a brash Yuppie in a newly deregulated City of London and stock markets were booming. The wealth generation’s icon, Margaret Thatcher, was set to win a historic third term in office and very few people were betting against her pulling it off against a rather hopeless Labour party led by Neil Kinnock. Alex was of course keen to exercise his franchise in her favour.

The idea of voting by telephone doesn’t seem so absurd today. But would Millennials have any idea what a fax was?

Our approach to the election was to assume that the pollsters’ prediction of a Conservative victory was correct and on the day (before we knew the result) we produced this cartoon to run in the following day’s paper. It was squeaky bum time for us all that night in case Kinnock pulled off a shock victory and we looked silly, but in the end we were vindicated. We’ve never dared do such a thing since. Certainly not with modern opinion pollsters’ record.

In 1992 we decided to have Alex stand as Conservative candidate in the safe Labour seat of Grimley East. The strip had only recently transferred to the Daily Telegraph (having spent four years at the Independent) and we thought Alex as a Tory candidate might appeal to our new readership. Most of the jokes revealed around Alex’s snootiness about his constituency which was somewhere Up North. He duly lost (to be honest he wasn’t really trying to win), but somehow the Conservatives won overall.

Younger readers might need to google “Ceefax”. It seemed hi tech at the time.

The Telegraph’s then-owner Conrad Black threw a lavish party at the Savoy Hotel on Election night, which everyone assumed was to be a wake for Thatcherism. When the TV screens installed in the room for the occasion showed the Tories winning a totally unexpected majority the guests were bewildered, some wondering if it was an elaborate hoax perpetrated by Black.

The main theme of the 1997 election was the utter certainty that the Conservatives, under the apologetic John Major, would be annihilated and that Tony Blair’s New Labour would sweep to power on a tide of Cool Britannia (which duly happened). The theme of Tory MPs going like cattle to the slaughter was foremost in many of the Alex cartoons on the subject. The City tried to reassure itself that Blair’s Third Way wouldn’t be so bad for them, but Alex was still understandably nervous about the first Labour government in his professional lifetime.

Alex had learned his lesson from his drubbing in Grimley East and didn’t stand again, but various of his banker colleagues did, with predictable results.

Things had all worked out rather well for the City under New Labour and its “intensely relaxed” attitude towards wealth accumulation, fuelled by the dotcom boom of the late 90s. However the tech markets crash in March 2000 had reversed all this and banks were in full-on retrenchment mode by the time the 2001 election came round. There was little doubt that Tony Blair would win again, but zero chance that this would reverse the plummeting fortunes of the City, so apathy was the theme of the day.

Apathy prevailed at the next election too, but for totally opposite reasons. The Boom and Bust cycle had been “abolished” by Chancellor Gordon Brown and the economy was in rude health. Stock markets were storming ahead, deals were back in fashion, everyone was awash with money and no-one was much worried about who was in charge of the economy. The first nervous mutterings about “subprime” loans would not start to be heard for another year. So complacent was Alex that he even went on holiday during the week of the election, spending all that money he had made from flogging Mortgage Backed Securities, Collateralised Debt Obligations and other soon-to-be worthless financial products to his clients. 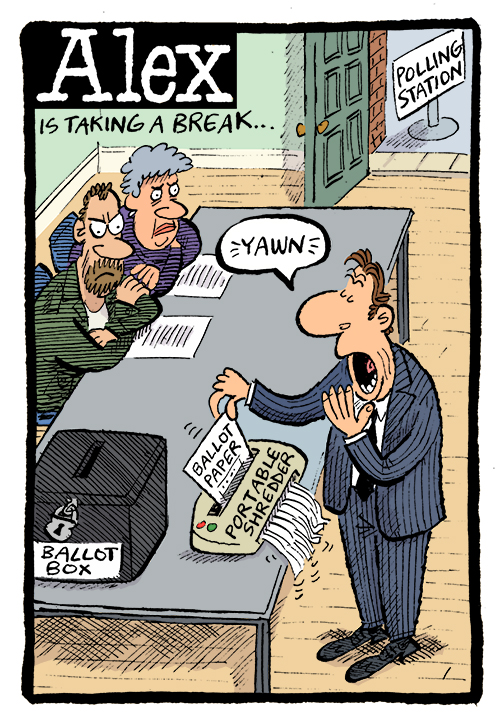 Five years on and everything had changed. The financial crisis was now in its third year, banks had been bailed out and Prime Minister Gordon Brown had had enough of taking the flak and was happy to hand over to someone else. Various City bankers in the Alex cartoon had stood as election candidates over the years, but for the first time one of them actually won his seat, Justin, who would become a regular character in the strip.

This was the first election in which social media played a key role. This new way of disseminating news, rumour, gossip, scandal, disinformation and plain fibs confused the electorate sufficiently for them to vote in the first hung parliament for a generation. The self-satisfied partnership of David Cameron and Nick Clegg were the Ant and Dec fronting the coalition government.

Five years later David Cameron managed to win himself a clear majority by promising to hold a vote on Britain’s membership of the European Union. He probably reckoned he could avoid having to deliver on that; and, even if he did have to, he’d easily be able to swing the vote in favour of Remain. Unfortunately, he couldn’t and the rest is history. And indeed present. And almost certainly future.

Labour had moved to the left under leader Ed Miliband, but still seemed a shoo-in for the election. Somehow they managed to blow it. In view of what was to come next they were probably quite glad.

Leaving the EU was proving a tad tricky to sort out, so Theresa May called a snap election, hoping she’d win a decisive majority, or, if she lost, at least Brexit would be someone else’s problem. In the event she ended up in the worst of both worlds, losing her majority and running a minority government. Labour’s new hard-left leader Jeremy Corbyn seemed an electoral liability, but proved unexpectedly successful, striking fear into the heart of Alex and his fellow City wealth-creators.

Alex faced the ninth election of his professional career and the third in the last five years (not to mention a couple of referendums) assuring that the British people were thoroughly fed up with politics and politicians. Despite this, Alex decided to pin on his rosette and stand as a candidate again, motivated mainly by the desire to find himself a new job following the devastation wreaked on the City of London by Brexit and the draconian new regulatory code MiFID II.