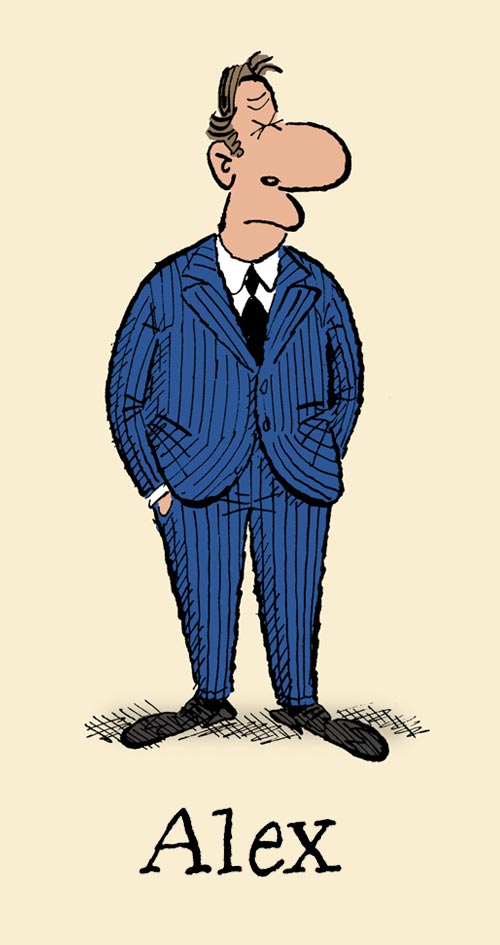 ALEX MASTERLEY is the eponymous hero of the cartoon strip. Alex began life as a yuppie banker in the tail end of the 80s. Callous, cynical, arrogant, shallow, snobbish and materialistic, he epitomised all the dubious values of that age. Since then he has mellowed and matured somewhat via a series of life changing events. In 1988 he married girlfriend Penny and their son Christopher was born the next year. At the dawn of the “Nice Nineties” they paid lip service to environmental concerns and moved to the country as townie weekenders.

Over the years Alex has had a series of adventures - unusual for an investment banker - including being kidnapped, stranded in the Amazonian Rainforest, shot by an unknown assailant, run over by his own wife and abducted by aliens. He has been fired twice, had a nervous breakdown, a heart attack, checked in to rehab and has stood as a political candidate. He has also had numerous affairs including with his secretary Wendy, his boss Jane and his client Carolyn.

These days he enjoys a senior, if somewhat nebulous, role at Megabank, the international investment bank where he works. His main interests are attending sports events and living an affluent and agreeable lifestyle, preferably at his employer’s expense. He wages ongoing hostilities with his American boss Cyrus and his co-workers in the bank’s compliance department.

Search for strips about Alex: